Minisforum has been around since 2012 and has offered some really innovative designs, mostly in the Mini PC segment. Their DeskMini and EliteMini series have been the most popular & regarded as some of the best options for small form factor and HTPC users. More recently, Minisforum has started to offer more powerful systems powered […] The post Minisforum EliteMini HM90 Mini PC With AMD Ryzen 9 4900H ‘Renoir’ APU Review by Hassan Mujtaba appeared first on Wccftech. 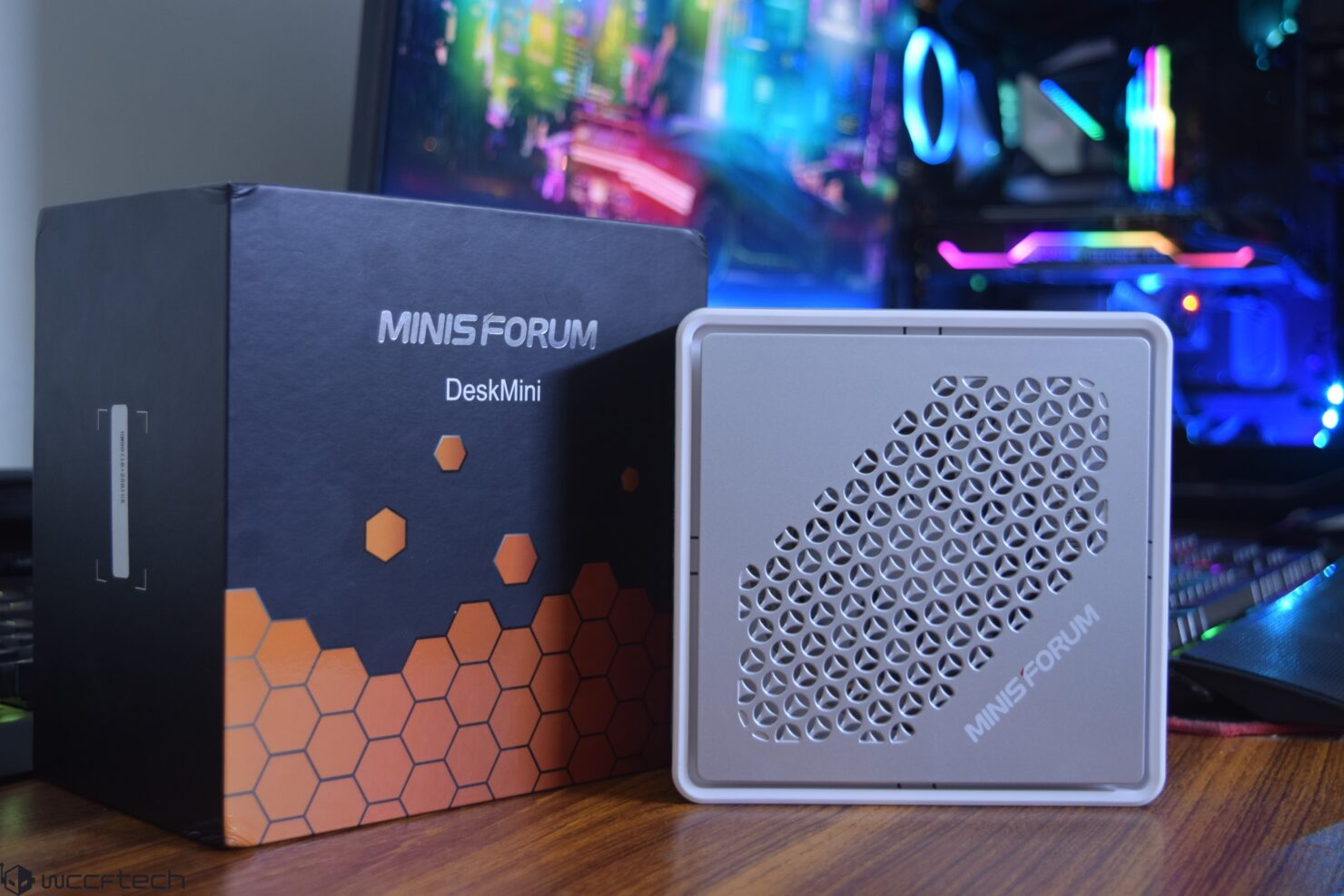 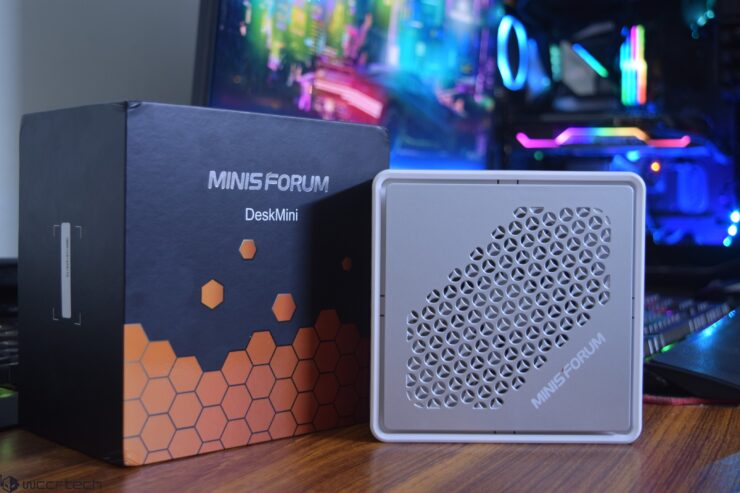 Minisforum has been around since 2012 and has offered some really innovative designs, mostly in the Mini PC segment. Their DeskMini and EliteMini series have been the most popular & regarded as some of the best options for small form factor and HTPC users. More recently, Minisforum has started to offer more powerful systems powered by AMD Ryzen APUs, offering up to 8 cores & 16 threads of fast Zen cores.

One of their most recent products is the EliteMini HM90, a Mini PC that is powered by the AMD Renoir APU architecture. The product is very interesting as you can buy it in a standalone bare-bone kit to configure yourself for $629 US or get it configured in two variants starting at $849.0 USD.

Minisforum has already launched several AMD Ryzen 5000 APU-powered Mini PCs including the EliteMini X500 and the Elitemini HX90 but the Elitemini HM90 seems to be more of a mainstream solution for everyday workloads. It is a very capable machine powered by AMD's Renoir APUs and will offer decent gaming performance too if you plan to use it for eSports titles & a few moderate gaming sessions. 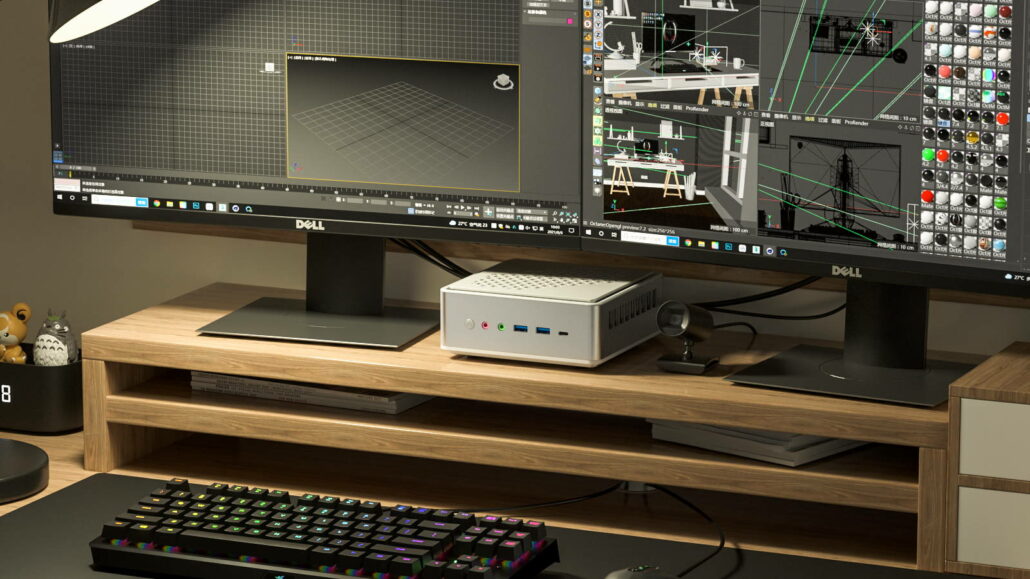 Coming to the specifications, the Minisforum Elitemini HM90 rocks the AMD Ryzen 9 4900H APU which features 8 cores, 16 threads, 4 MB of L2 cache, 8 MB of L3 cache, and a boost clock of up to 4.4 GHz. The CPU has a configurable TDP ranging between 35-45W and also carries an 8 CU iGPU based on the Vega architecture which operates at 1750 MHz. Additionally, the barebones setup is going to accommodate up to 64 GB of DDR4 memory and will offer two SATA III HDD ports along with a single M.2 Gen 3.0 port. Minisforum themselves offers 256 and 512 GB configurations.

In terms of design, the Mini PC comes in at 149.6 by 149.6 mm in has a height of 55.5 mm. It also weighs in at just 650g which Minisforum states are as heavy as a regular water bottle. The company also shared some performance numbers in various games and it looks like 60 FPS with decent settings at 1080p is very much possible on the machine.

Software-wise, the Mini PC will come loaded with Windows 10 but a free upgrade to Windows 11 will be available to users. The Elitemini HM90 Mini PC will come with a 2-year warranty and free shipping worldwide. There's also the AMD Ryzen 5 4600H variant which starts at a slightly lower $479 US retail price.

The Minisforum HM90 comes within a small cardboard box package. It has a black color on the front with the 'Minisforum DeskMini' label and orange-colored hexagons at the bottom. 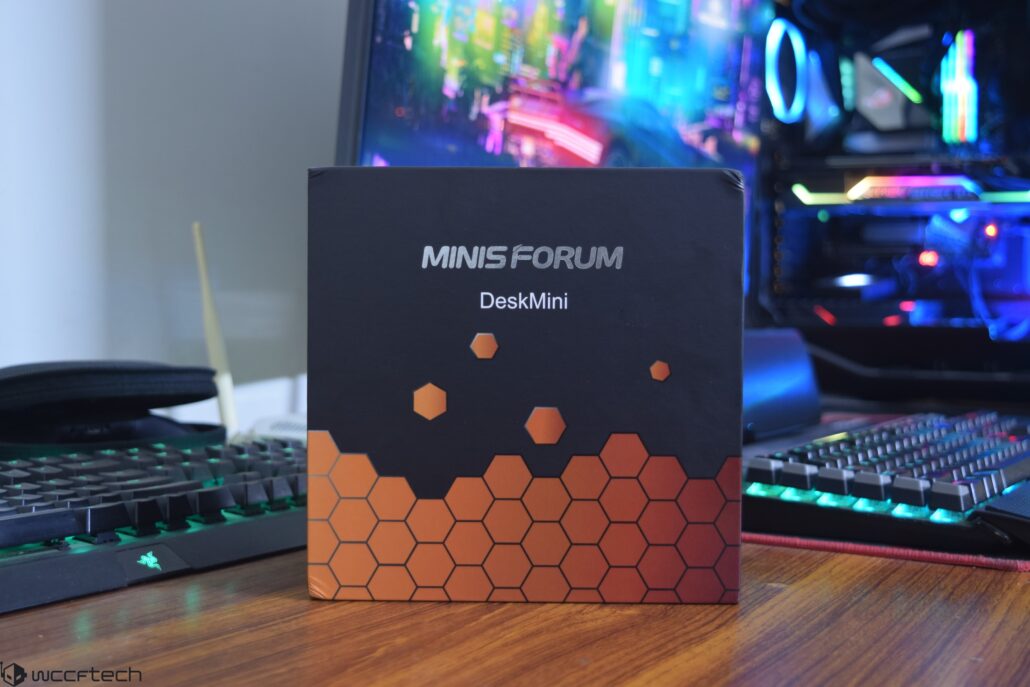 The back of the package has the label on the top left corner and contact information for after-service. No specifications or features are listed but there's enough space for it so it is likely that future packages will include it. 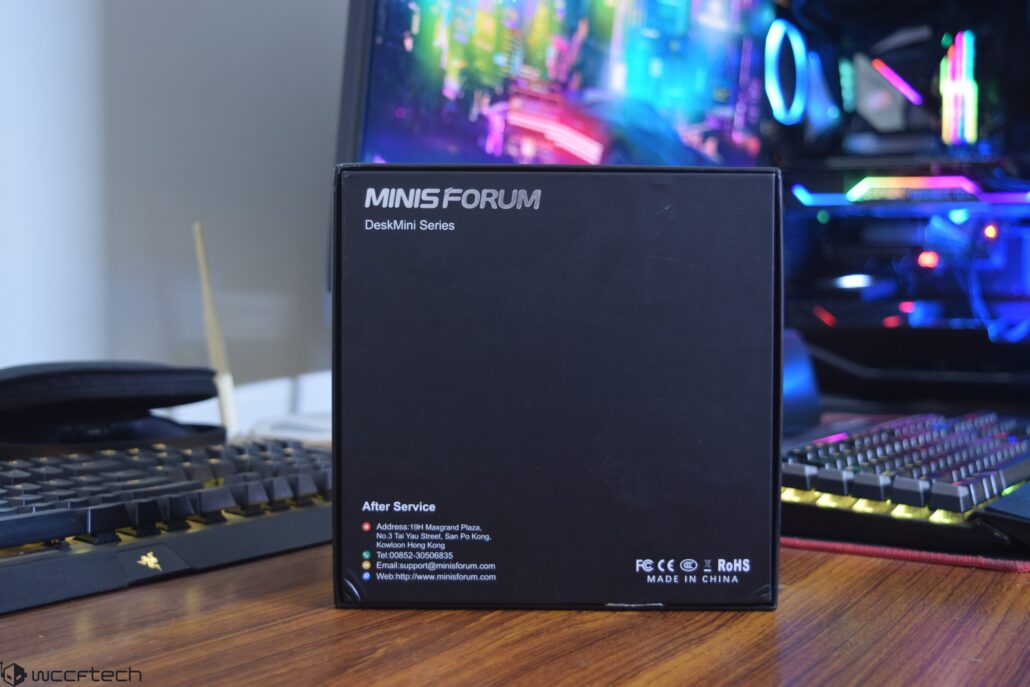 Lifting the top box cover, you are welcomed by the DeskMini HM90 itself which sits in a soft-styrofoam casing and is wrapped within a plastic foil to prevent dust from entering the top perforated holes. 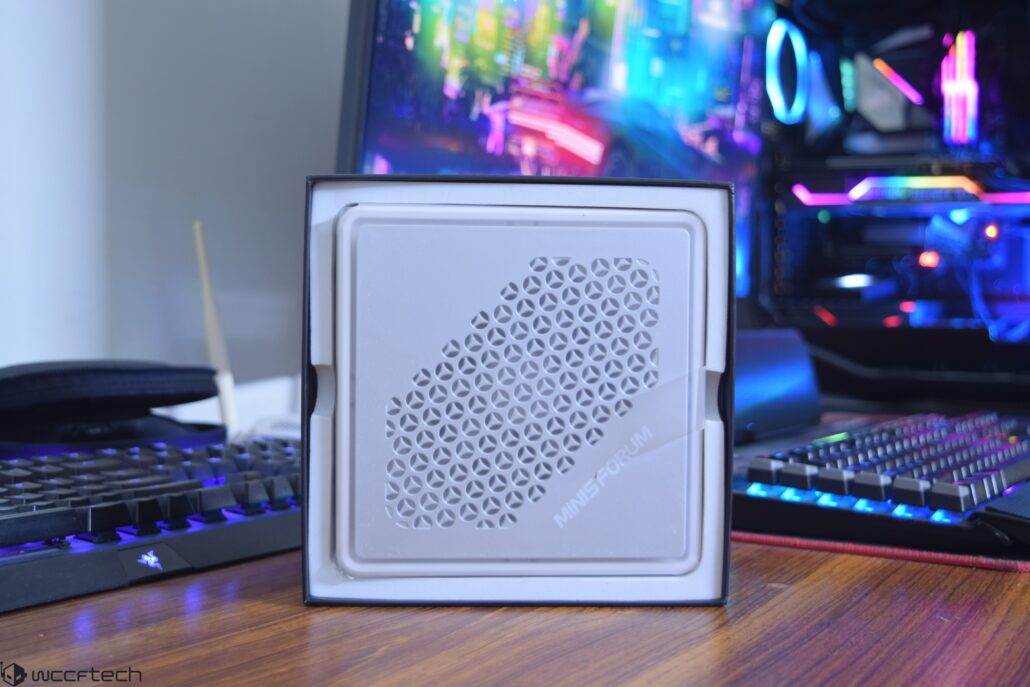 Before talking about the case itself, we have to mention the accessories that come with the HM90. It comes with a Power Adapter that is DC 19V/6.3A compliant, an HDMI cable, a mounting bracket, and a user manual. 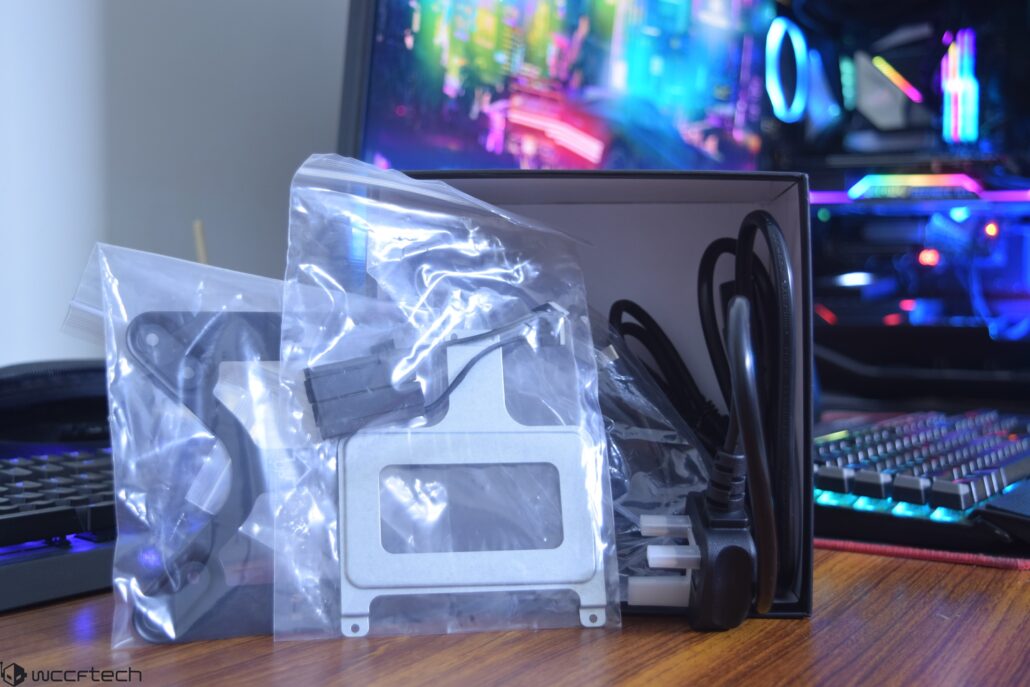 Out of the box, the Minisforum DeskMini HM90 is a nice and clean Mini PC that rocks silver and white aesthetics. The metallic finish looks great. 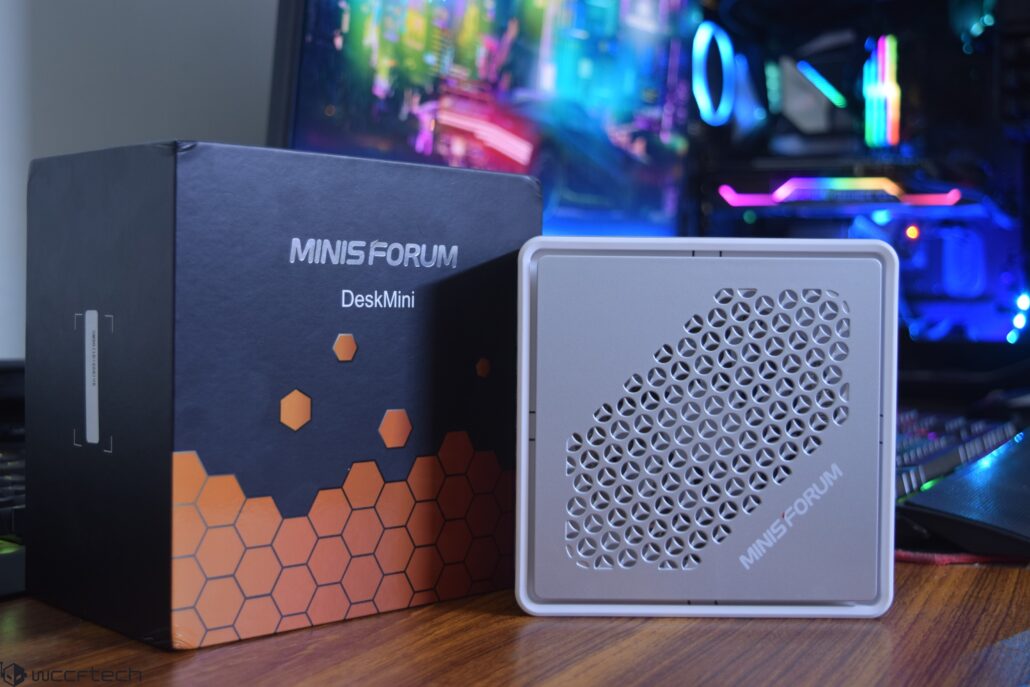 As for dimensions, the HM90 measures 149.6 x 149.6 mm on the sides and has a total height of 55.5mm. It is slightly bigger than the palm of your hand but it is still one of the smallest Mini PC I have tested with an AMD Ryzen CPU inside it. The whole thing also weighs in at just 650 grams. 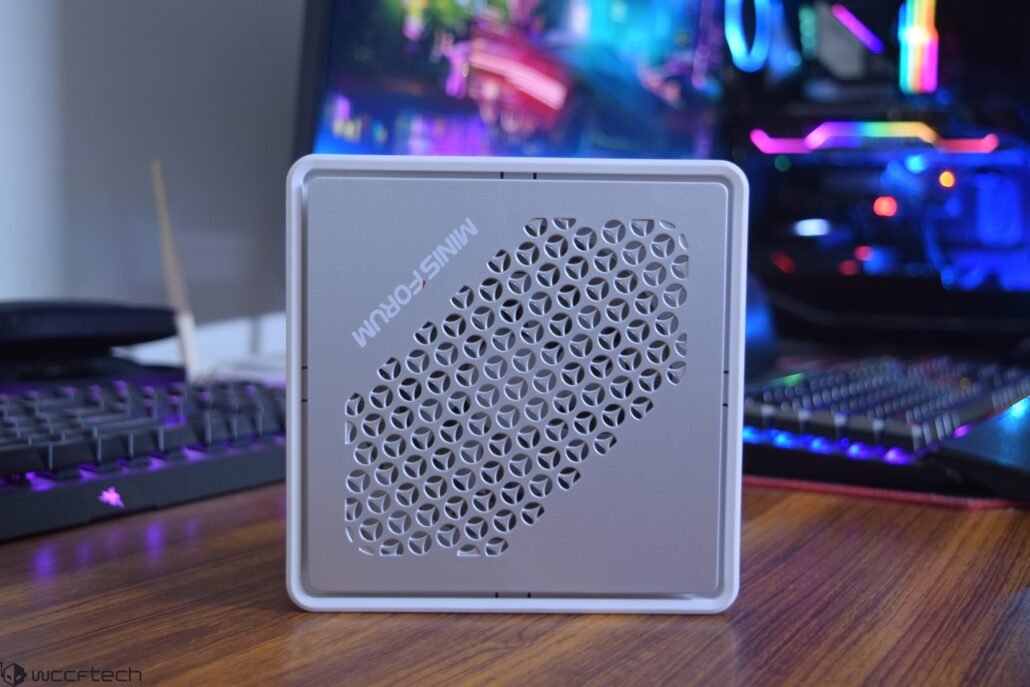 The exterior shell of the case is made out of aluminum and is a very solid design. The bottom cover is plastic & can be removed by unscrewing four screws that aren't hidden beneath any of the footrests. 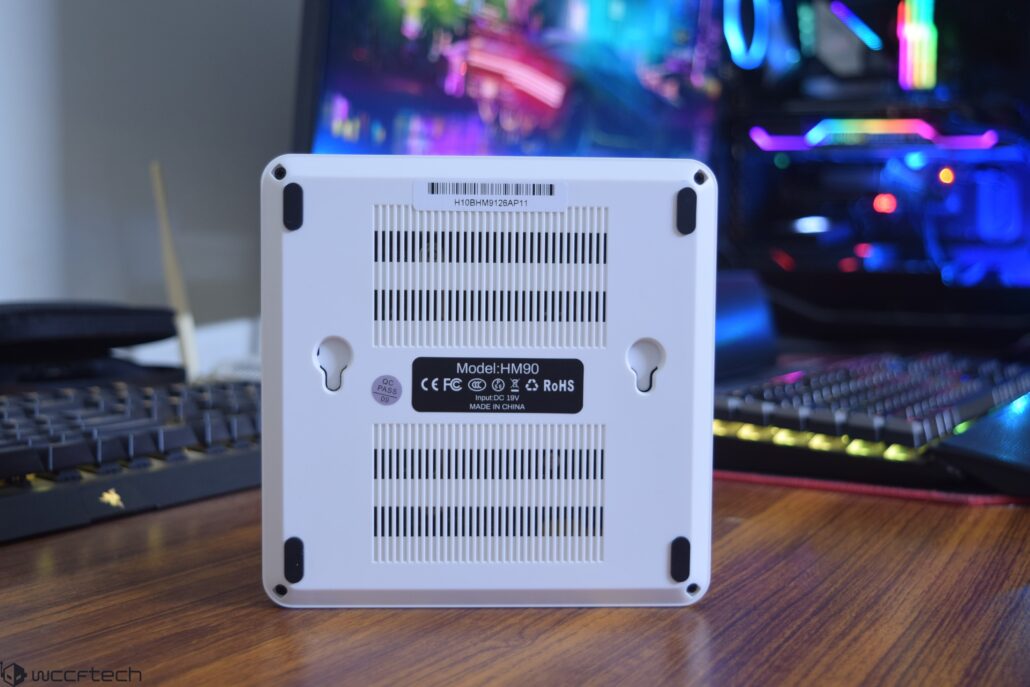 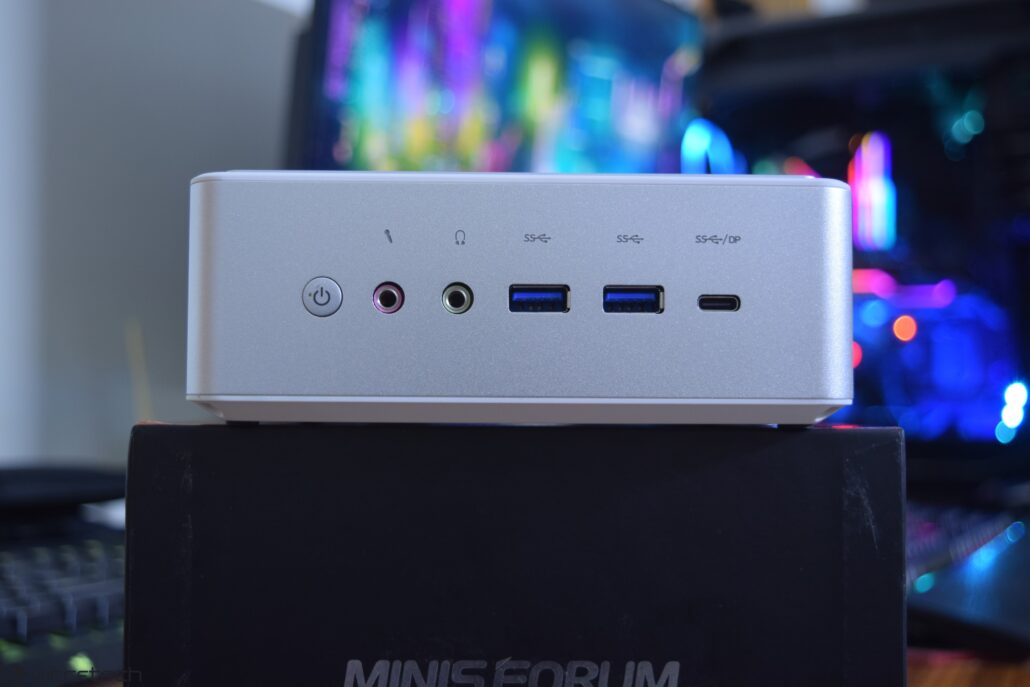 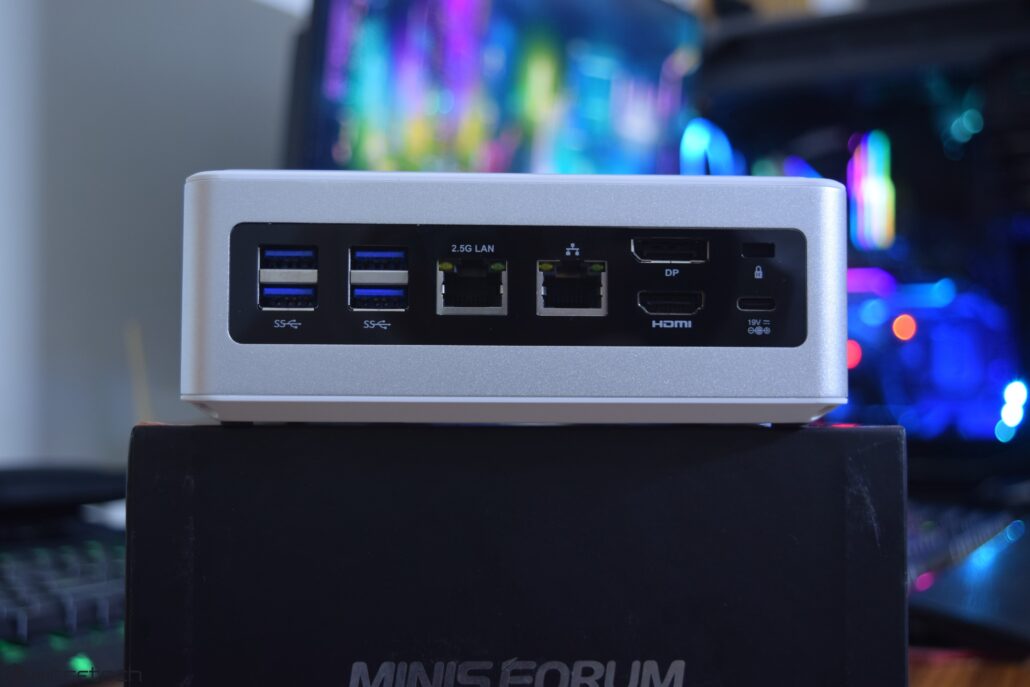 The sides of the Mini PC feature huge vents that reveal the aluminum heatsink fins within them. This allows the HM90 to vent hot air out of the internal case. There's also a Clear CMOS Pin on the left side.

As stated above, opening the bottom plastic cover is simple and reveals the internals that is fully upgradable. These include the SODIMM memory modules, SATA HDD, and the M.2 SSD. The VRM also comes on the backside of the motherboard and is covered within a black heatsink, the same goes for the M.2 SSD. 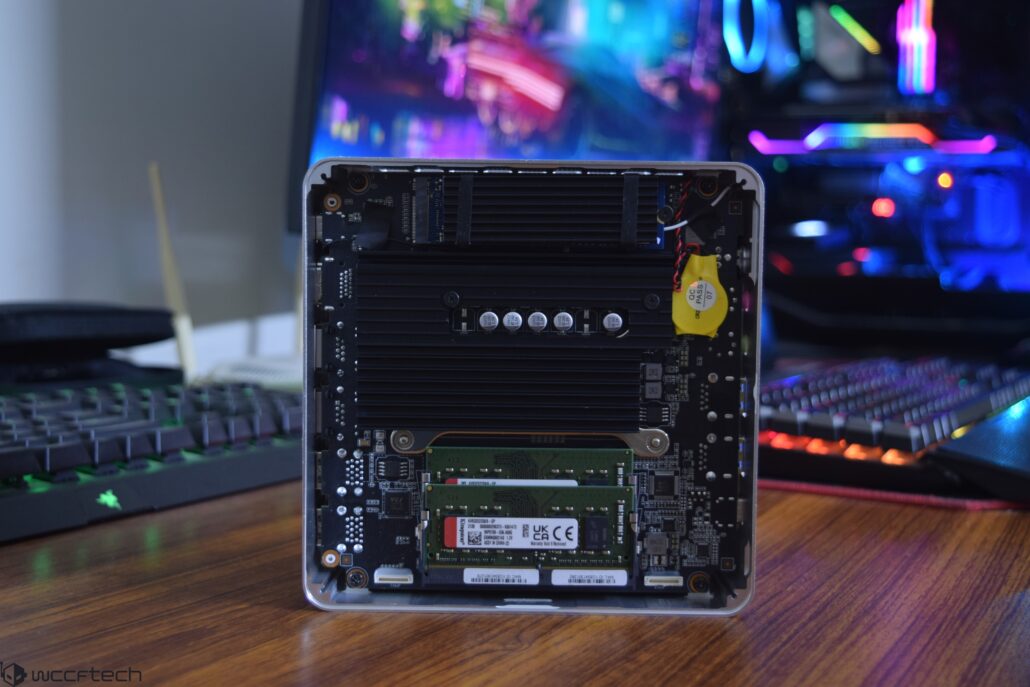 There are two SODIMM slots and our HM90 sample comes pre-configured with 16 GB of DDR4-3200 memory, 256 GB of SSD (pre-installed with Windows 11), a WiFi module. The two SATA 2.5" drives are attached to the ports next to the SODIMM slots (the white ones) through a SATA III connector that's bundled within the accessories. Only 2.5" drives are compatible given the small and limited size of the chassis. 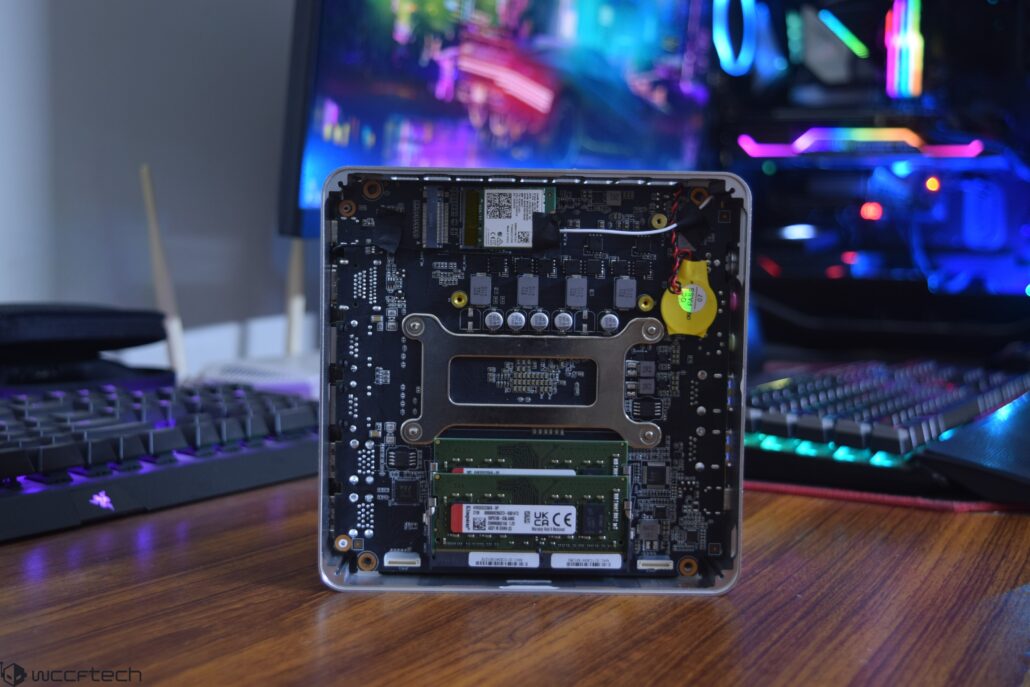 The AMD Ryzen 9 4900H rests on the other side of the case and has a small heatsink solution over it with an active fan cooling design. The fan is colored white and can be seen through the front top cover. It is really hard to access the entire motherboard as the I/O ports get locked from the other side by Minisforum stating on their main page that they use Liquid metal as a cooling solution for the HM90. 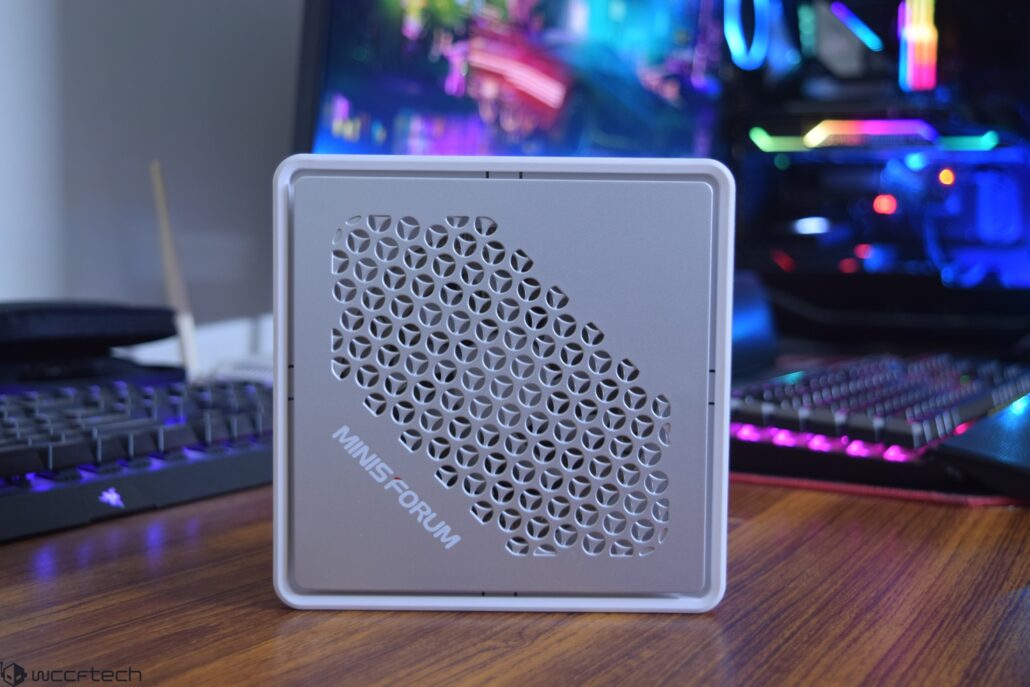 In the CPU benchmarks above, you can see that the AMD Ryzen 9 4900H has a strong performance showcase in multi-threading workloads thanks to its double the core and thread count over Intel's existing NUC lineup. The single-core performance is definitely faster than Intel's 14nm offerings but this is one segment where the Tiger Lake NUCs lead. A Ryzen 5000H powered DeskMini with Zen 3 cores can deliver even better single and multi-threaded performance.

For gaming, we tested a couple of the latest and most played esports titles at 1080p resolution. The performance was measured between the AMD Vega 8 and Intel Iris Xe-LP integrated graphics. Even though Intel's Hades Canyon comes with a high-end Vega discrete GPU, it isn't part of the CPU itself and hence ends up much faster while consuming a lot more power. Even the Phantom Canyon Mini PC is fitted with a discrete (embedded) RTX 2060 graphics card but its not wise to compare to that.

As for thermals and power, the DeskMini HM90 is very efficient considering it's based on the 7nm process node. Talking about power consumption first, the system consumed 8W at idle and about an average of 62W at full load. Surprisingly, the gaming load is higher than a synthetic workload such as 3DMark Time Spy which pushes both CPU and GPU while average applications such as Microsoft's office suite only pushed the system to an average of 22W. A Cinebench R20 run yielded a power draw of 53W.

As for thermals, the CPU itself has an active cooling solution which means the temperatures for our test unit never went above 60C and operated at 56C in all kinds of workloads, even gaming. The PC case does become slightly warm but it's nothing that bad and you can pick it up in bare hands even under full load. Most of the heat is dissipated out of the chassis and you can barely hear the fan spinning which is always great for low-noise office environments.

The AMD Ryzen powered EliteMini HM90 retails for $649 US and laptops with this specific chip usually retail for around $1000 US while those with discrete graphics options start at $1200 US.

The Ryzen 9 4900H within the EliteMini HM90 is a very capable chip with lots of CPU horsepower. The 8 cores delivered tremendous performance throughout all workloads and really makes it an SFF powerhouse with its 8 cores and 16 threads. What's even more impressive is the Vega 8 iGPU which still holds a lot of muscles to play the latest titles at 1080p low or 720p medium settings. It was nice to see Forza Horzion 5 working on the machine at over 60 FPS. The Iris Xe GPU on the Intel chips is still far from reaching the prowess of AMD's Vega iGPU which is several years old and has more driver support backing it up. 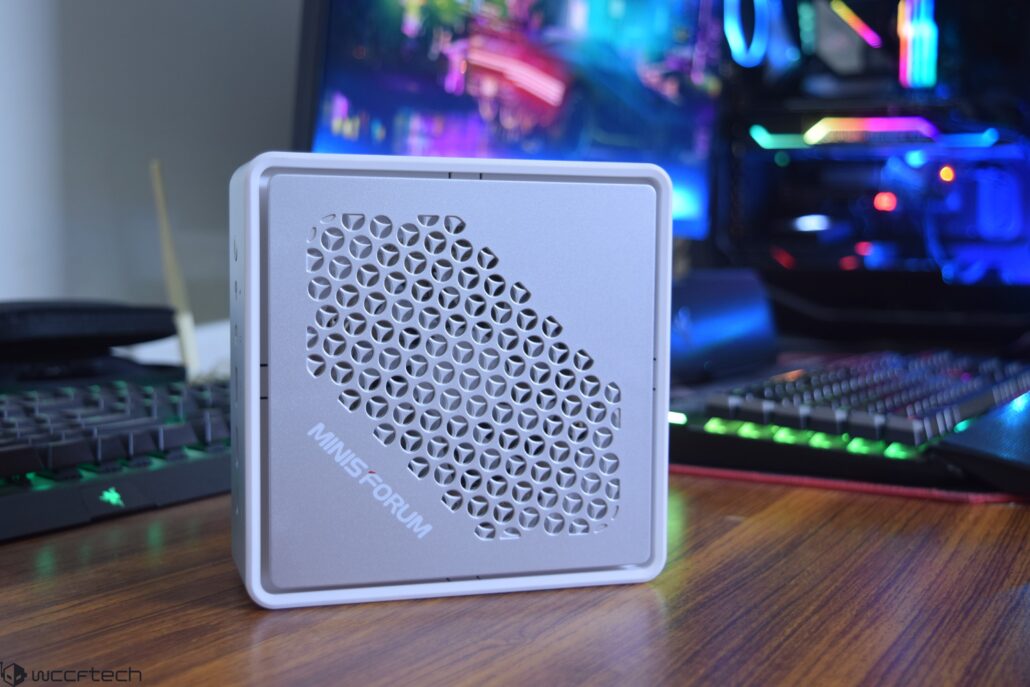 Our configuration with 16 GB memory and 256 GB SSD is the bare minimum. The problem is that the main SSD is loaded with the OS so you are left with under 200 GB worth of space for actual use. You can get the higher-end configuration with a 512 GB NVMe (Gen 3) SSD or expand storage using the dual SATA III ports but that's going to come at an extra cost. So capacity is something you have to consider when getting the EliteMini HM90

Aside from that, the thermals and power consumption for the HM90 are fantastic, and given the power of the machine in such a small package, it is definitely one SFF PC that you should definitely consider for office, home theater or even light gaming.

Twitter introduces aliases for contributors to its Birdwatch moderation program 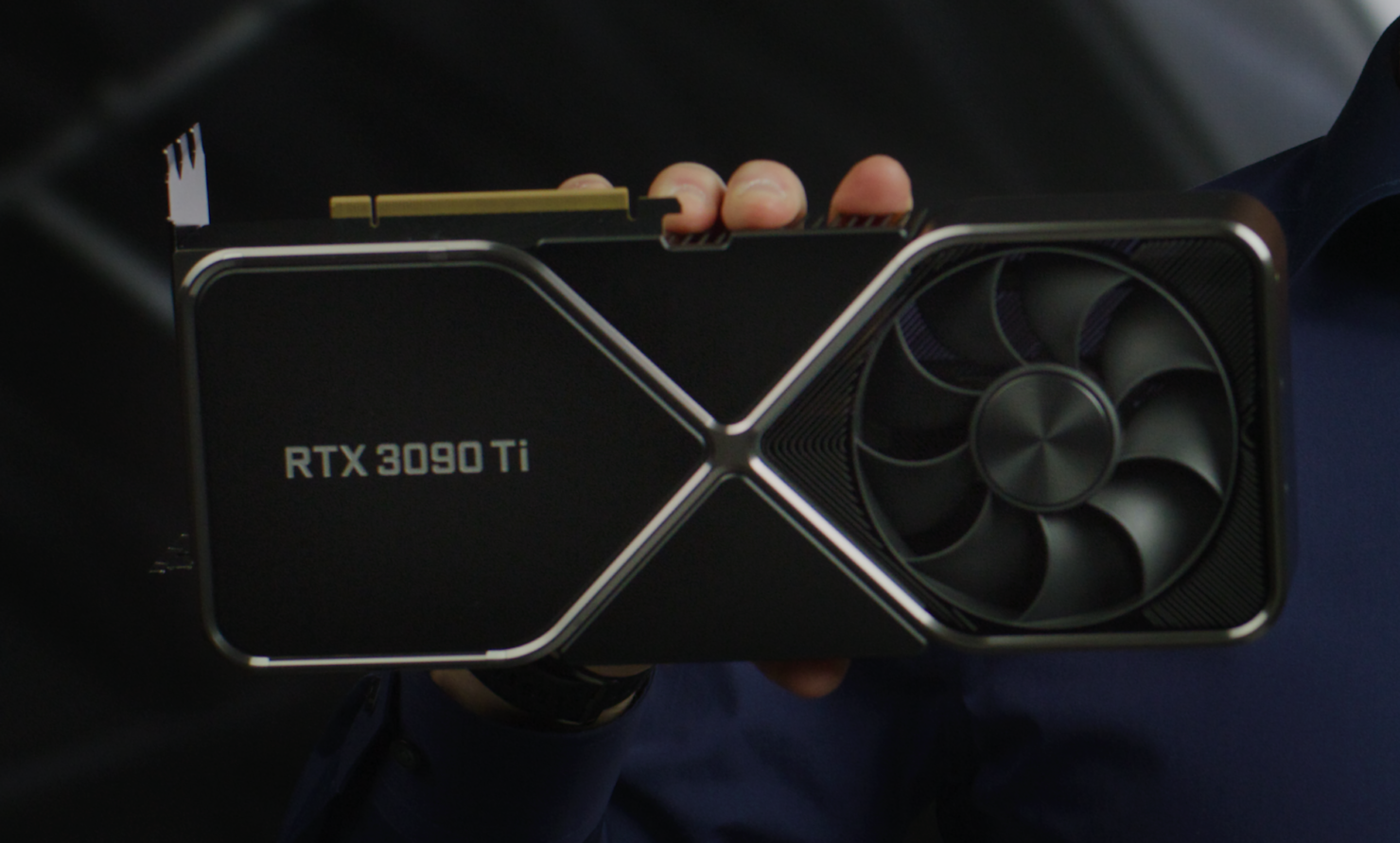 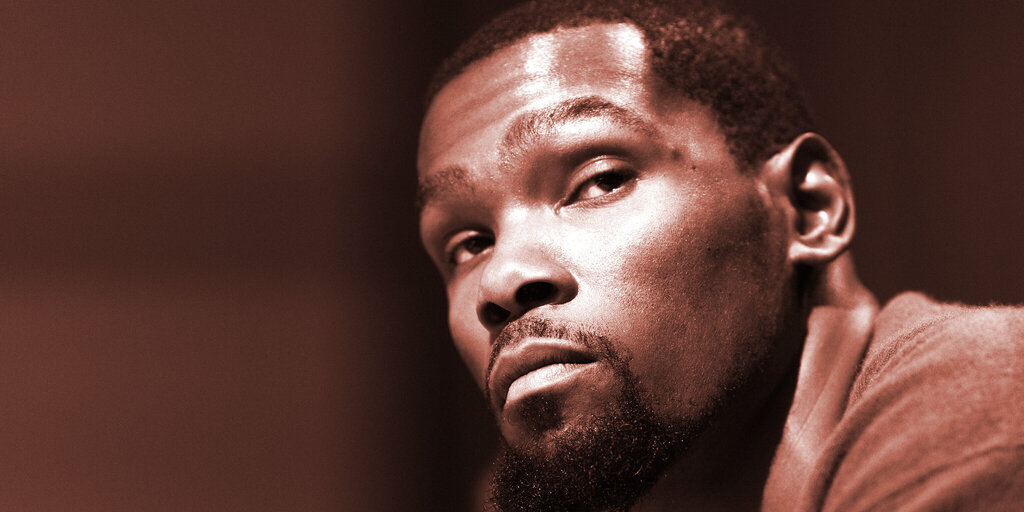